One of the best April fools jokes ever was played by the BBC when they reported on the growing of “spaghetti bushes”, showing bushes covered in spaghetti that was said to be drying in the sun after harvesting. Considering this was 1957, people could be forgiven for being taken in by this. However, it seems that there are still worry

ing gaps in knowledge about food and its origins.

Just over two years ago the British Nutrition Foundation carried out a survey amongst 27,500 five-to-16-year-olds to find out how much they knew about food and where it comes from. There was some confusion about the source of pasta among younger pupils, with about a third of five-to-eight-year-olds believing that pasta is made from meat (or did they mean wheat!? So, we thought we would do our bit to clarify this.

The aim of The Real Junk Food Project is primarily to use food destined for the bin to feed people on a ‘pay as you feel’ basis. However, we also feel that it is important to help people to help them

selves; to help them use the food and ingredients they have at home in a more sustainable way so that less food is wasted. To this end, two pasta making workshops have been delivered at Ladywood Community and Health Centre over the past few months. The first of these was attended by Ladywood residents with both adults and children alike taking part, the second one in September was attended by adults from further afield to learn more about this lovely Italian carbohydrate.
In line with the aims of the project we used eggs donated by the time Union and pasta flour that was close to its use by date and destined for the bin. So, effective 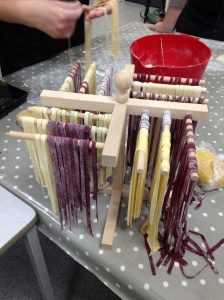 ly we made some healthy pasta from waste food. We even used leftover beetroot and herbs to flavour it.
The results were amazing! In addition to taking some tasty food home, the main benefits according to our attendees included the therapy gained from kneading the dough, not to mention the gym membership fees saved (pasta dough is quite stiff, very good for working those biceps). The opportunity to get together with others to share the experience of being creative and learning new skills should not be under estimated either. All this and free aromatherapy from the mix of parsley, chives and tarragon. Look, a tagliatelle tree! We have plans to run more food waste workshops soon, watch this space!

This site uses Akismet to reduce spam. Learn how your comment data is processed.

If you’d like to make a financial donation to support our work you can do so securely here: